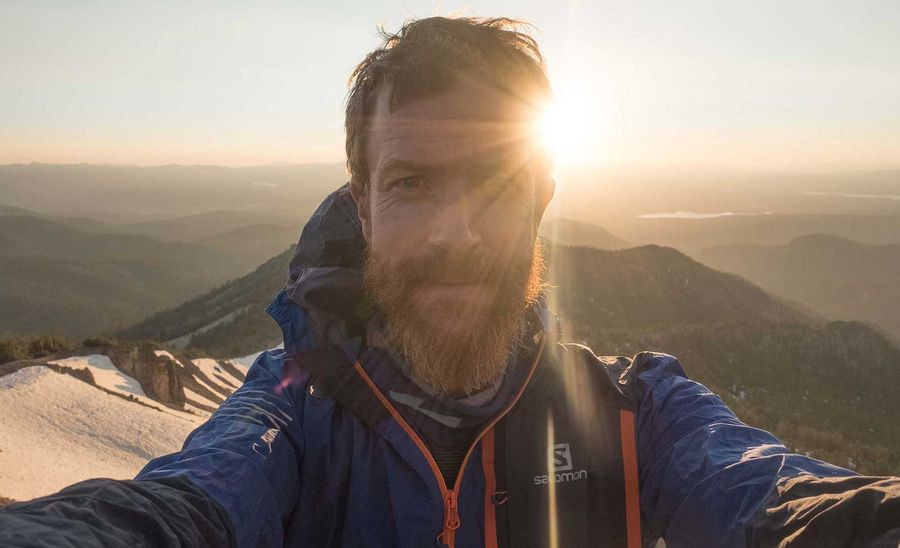 Why I Ran Across the U.S.

Last year, ultra-runner Rickey Gates ran from South Carolina to San Francisco—a 3,700-mile solo jaunt that crossed through 11 states. What possesses someone to run for five months straight? Lance Armstrong posed that very question—among others, like how many pairs of shoes he blew through and what he thinks about the boom in ultra-racing—during a recent conversation with his running buddy.

LA: What in the hell compels someone to run across the country totally unsupported?

RG: I wanted to do something that people would look at and be able to emulate if they wanted. The message was: Anyone can do something like this. Maybe you don’t do it quite as fast, but anyone can do it.

LA: Where’d you sleep the other nine days?

RG: It was mostly camping. I had a tarp that was also my poncho and a small sleeping bag, and it all fit into my running pack. When I got to the desert—Utah—I needed a whole lot of water, so I found a little golf cart caddy thing at the thrift shop in Moab and that worked for about 100 miles. Then a buddy sent out a baby jogger. I picked that up at the post office in Hanksville, Utah, and used that for 600 miles. It allowed me to do longer miles in the desert—35 to 40 miles a day. It carried 3 gallons of water, 3 days’ worth of food and my clothing. I also picked up trash along the way.

LA: What was the longest day you did?

LA: And the shortest?

RG: I had a 5-mile day. I decided to camp outside Austin, Nevada and go into town to celebrate the Fourth of July. 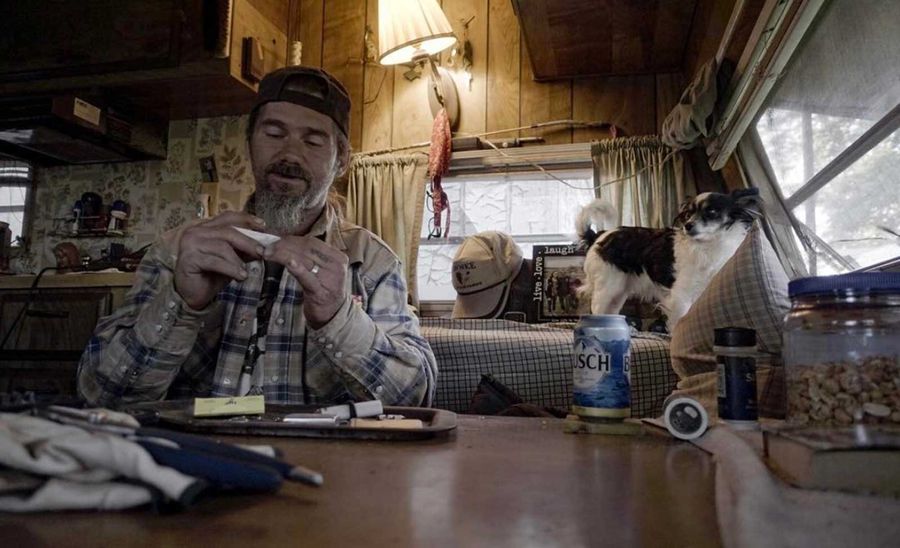 "'Where you guys staying?' I told him I wasn't sure. 'You're staying with me then, brother man. I got an empty house. I live in the trailer next to it. Nobody in the house but two dogs and a crazy fucking squirrel. You're not gonna steal nothing are you?’ I told him I wouldn't..." —@rickeygates Instagram post; April 27, 2017

LA: Did people just let you crash with them? I would’ve been looking hard for support.

RG: For the most part, I was doing pretty good just sleeping under the stars. But you get torrential rainstorms across Arkansas, Oklahoma and Kansas in the springtime, and one of those nights I got soaked to the bone. I cruised into a store in a small town the next day and was pleading with the woman behind the counter, asking where I could stay dry. There weren’t any hotels. A guy behind me in line with long Willie Nelson braids, tattoos on his fingers, missing a lot of teeth, and a can of Busch Light in his hand said, ‘You’re staying with me tonight, Bud.’ His name was Kevin Wilson. He had pretty sorry living conditions. He told me all about his life. It was what I was aiming for on this trip—to meet people I wouldn’t meet in my normal life and spend some time with them and hear some stories. I think because of the bubbles that we live in we don’t get to cross over those lines very much.

LA: When you announced that you were doing this run, you said, ‘You cannot know the world without knowing your own back roads. In a time of uncertainty and a crescendo of differences, I’ve chosen to slow down, simplify my life and get to know my country by a step-by-step intimacy.’

RG: I went into the trip trying to be as unbiased as I possibly could and, more than anything, wanting to meet people that I disagreed with. And I found that consistently across country. I went through 11 states and I think 9 were red states. It was cool to just sit down and talk and try my best to not pass any judgement. I sat at a bar in Austin, Nevada, and the bartender was a Serbian man who had come to the States 40 years ago and had a big Donald Trump sign in the front of his patio. And he just started spouting politics. I was with a couple of friends, and they couldn’t handle it and started laying into this guy. But you can’t really figure out where people are coming from if you immediately put up a defense and start attacking them. It was cool to see how I had changed a little, and it’s a change I hope to maintain in my ‘regular’ life.

RG: I wanted to hit as many trails as possible, start in the south and go through my hometown of Aspen, Colorado, and finish in San Francisco. I came up with 6 or 7 trails I wanted to hit. I used the walking button for Google Maps to map the shortest route between trails. It sent me on some crazy backcountry roads.

LA: How many pairs of shoes did you go through?

RG: 11 or 12 pairs. I think you can do it with less and you can certainly do it with a whole lot more. I was trying out shoes that [sponsor] Salomon was making. They were sending them to my brother in Aspen, and then he was sending them to post offices along my route.

LA: I can’t run without getting injured. You must’ve had issues. Nobody can run that far without being in pain.

RG: I had a million little injuries, and most would come and go in a few days, which I think is a strong testament to the human body—it figures out how to repair itself. I’ve never had a whole lot of sympathy for people who say they have an injury and can’t run. I do pay close attention to stretching and massage.

LA: You didn’t go dry on this trip did you?

RG: Far from it. You need to have the carrot out in front of you. A gas station 20 miles up ahead with a Bud Light and an outlet to charge your phone is pretty much heaven on earth when you’re running across the desert.

LA: You do all kinds of crazy shit. You decided one year to go to Antarctica and work on a scientific base.

RG: Do you have any desire to visit a different planet? If it were a possibility to go spend some time on Mars or the moon? That’s what I consider Antarctica. It’s the closest that you can get to going to another planet, into outer space. I’ve always had a fascination with strange landscapes. I got an opportunity to go down to the South Pole and wash dishes for four months. I got outside to run every day. I ran a marathon. I found that you can be pretty comfortable running in minus 7 degrees. When I got there, it was minus 60. I put on 30 pounds. 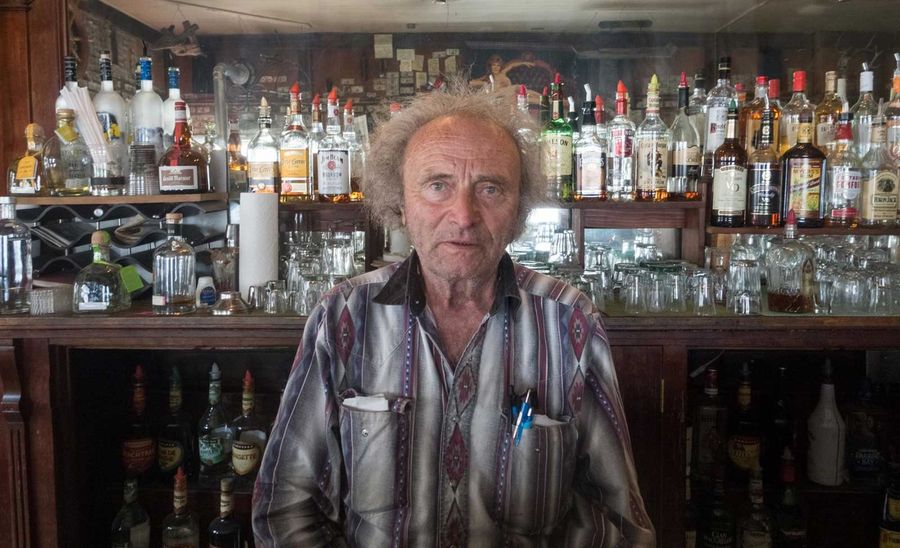 “Victor was spouting out something of rehearsed diatribe against most of the world's population. ‘Who are the good guys,’ I finally had to ask. ‘Well, you and me.’ ...I don't agree with everybody I meet along the road—probably Victor least of all. Sometimes my biggest effort on this trip is to listen to Victor.” —@rickeygates Instagram post; July 6, 2017

LA: You also rode your motorcycle from Aspen to Patagonia.

RG: It was on a 1979 Honda CX500. This thing looks like a Japanese version of the Motoguzzi, the Italian bike. I have a BMW F650 now, I bought it from a guy who had rode it down Africa, then up South America. I rode it from San Francisco to Alaska, back to San Francisco. It now has 100,000 miles on it.

LA: You like to make things hard on yourself.

RG: It’s just more interesting that way. I think we all have our own ways of challenging ourselves. Those are my ways. I could never do the training that you put yourself through. There are all kind of suffering.

LA: I’ve got nothing against suffering. Does the popularity of trail running surprise you? It seems like not only are the athletes becoming stars, but this sport is exploding. I’m a little surprised by the fanaticism around things like the Hardrock 100 and Western States.

RG: It’s good for me and people like me. I’m psyched to see the sport grow. I’ve been ‘making it’ as a runner for 10 years and my ability to live a very frugal life certainly helps with that. Running, for me, is about getting to places I can’t get to otherwise and meeting interesting people and seeing the world. I like to try to provide that with the hut to hut running trips that I put on.

A film about Gates’ “Transamericana” run will be released in early 2019. He’s also working on a book about the experience. This Fall, he’ll start a new endurance run, dubbed Every Single Street, during which he’ll cover the 1,200 miles that make up San Francisco. It should take 40 days. Follow him online, and listen to his full conversation with Armstrong here.