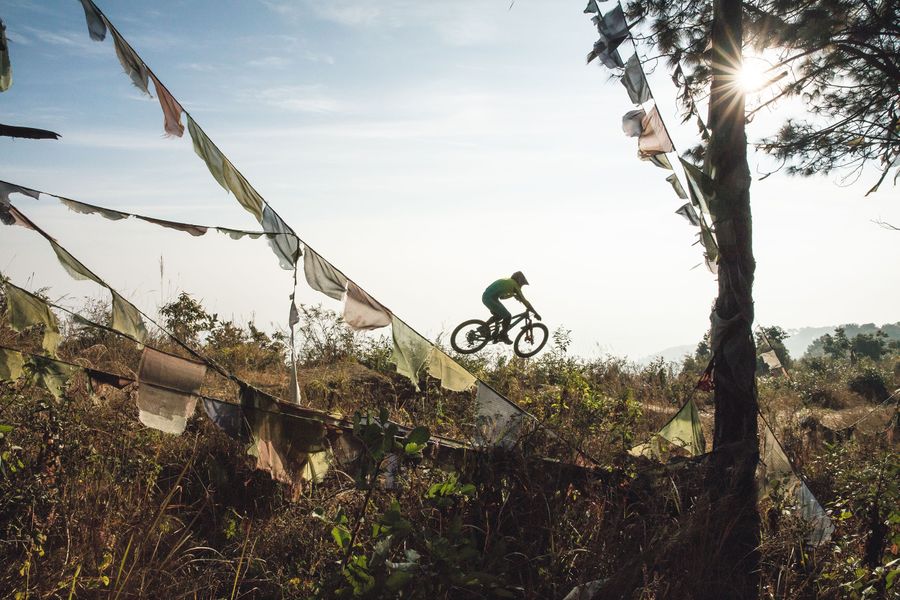 Get to know Rajesh "RJ" Majar, a kid from Kathmandu with mountain bike aspirations as lofty as the Himalayas.

When he was 16 years old, Kathmandu native Rajesh Majar—RJ—entered the first race of his life, a downhill mountain bike race, on a bike he welded from discarded metal plumbing pipes, and a $2 motorcycle shock. He built it after studying downhill bike geometry on the internet, which is also where he learned how to roost through berms, sail over tabletops and drop craggy rock bands.

Now 21, RJ is Nepal’s downhill mountain bike champion. And if he can get a visa, he plans to ride the 2019 Enduro World Series.

RJ grew up dirt poor in a 12’x12’ rented room he shared with his parents and sister. His mom worked as a maid, and his father laid bricks. As a small child, he did his homework in the fields while grazing his landlord’s sheep and cattle before and after school. “When he was very small, I would tie him to my chest and carry a load of bricks on my back,” recalls his mom, Deepa. ”I would work like this. That's why he understood hardship, and the need to work hard.”

RJ was gifted a BMX bike at age 11 by his mother’s employer. He taught himself to ride, and became obsessed with biking.

“I wouldn’t be able to concentrate in class,” remembers RJ. “Cycling would always be on my mind. I would look at my bike in the parking lot from the classroom getting ideas if I could make it any different. The minute I’d come home from school I would always go ride my bicycle. The minute I would wake up in the morning I would ride my bicycle. And a lot of times I would just skip school to ride.”

His parents, both illiterate, tried convincing him he should stop riding and apply himself at school. Deepa scolded him and hid his bike in the hayloft of a water buffalo barn to punish him for skipping class. RJ would find it and skip school again to ride. “We couldn't go to school, but we wanted our children to be well-educated,” says Deepa. “But he would only focus on cycling.”

His obsession grew, as did his parents' concern. Neighbors predicted RJ would end up jobless and an alcoholic, like his father. The landlord warned Deepa her son was squandering her sacrifices for his education, and that riding would lead to RJ’s ruin.

In a fit of fear and desperation, Deepa sold her son's BMX bike to a scrap metal dealer for 90 cents. RJ didn’t eat for days. Then he resumed sketching, working, saving and salvaging parts with fervor.

“I was taught that for people like us there is no other option but to work for other people,” says RJ. ”From a young age, I learned to work hard. But I decided that I wanted my career to be mountain biking, even though I had no idea how to make that happen.”

He gardened, swept floors and washed dishes. He saved up and bought a seven-speed rigid bike for $25 from a classmate. When he was able to access the internet, he immersed himself in mountain biking through Google and YouTube, looping videos of Aaron Gwinn, Sam Hill and Danny MacAskill, dissecting the riders’ tricks and techniques, trying to replicate them, and crashing a lot. RJ would arrange his friends on the ground in a line and jump them Evil Knievel style. He’d build gaps and drops in an empty lot, and session them endlessly.

Guided by some internet research, RJ cut and re-welded his dime store bike. He bought a $2 scooter shock, collected discarded plumbing pipe and, after penning hundreds of drawings, he took the bike to a Kathmandu welder.

“I added a shock, and changed the head angle,” remembers RJ. “When it was all done, the bike was really nice. I had never ridden a bike that was better than this.”

At 16, he entered a race at Hattiban, Kathmandu’s downhill course. “People said the bike wasn’t going to last on the trail—that it would break in two,” recalls RJ. “I was already scared, and then when people said all those things I got even more scared.”

He swallowed hard, and sent with everything he had, catching the attention of other riders who had loaned him their handlebars, stems, kneepads, pedals and a helmet for the race. Another rider had paid his entry fee. He finished 8th overall.

"I knew that if I had a better bike I'd do better,” said RJ. “So I determined to keep at it and see if I could get a proper bike and support from somewhere.”

Mandil Pradham, owner of bike tour company Himalayan Rides, was pre-riding the race course at Hattiban the day before a big downhill competition, when he saw RJ launch a road gap out of the corner of his eye. “He looked really fast, says Mandil. “I was super curious who the kid was… he seemed to have potential.”

Later that day, they met. After Mandil recovered from his astonishment at the frankenbike RJ was so adeptly captaining, he offered RJ his Banshee Rune for the race, as well as a ride to the venue, saving RJ the 1.5-hour ride before he raced. The next day, RJ dominated on the course, but broke his chain 200 meters before the finish, taking 4th.

"He was disappointed," recalls Pradhan. "But I was super impressed."

In 10 days, RJ earned more than his whole family earned in a month. The following month, RJ won DH Nationals on Mandil’s Banshee, earning his nickname: RJ Ripper. That summer, Mandil took RJ to India for his first international race. He won by 40 seconds in what Mandil calls "appalling conditions." RJ won Nationals again in 2016 and 2017. And he kept guiding.

I met RJ on an H&I Adventures mountain bike tour in 2015, the first Yeti International Tribe Gathering. Pimply and shy, he’d sit quietly with guests at meals only for as long as he had to. He spoke quietly and knew little English. But he always had a huge smile, and an eagerness to help.

In the smoky kitchen of a tea house in Marfa, I asked him about his goals. Mandil, who has become RJ’s mentor, sponsor and defacto older brother, translated. And RJ whispered, almost like he was afraid to jinx himself."I am earning a living riding a bicycle, I am learning to be a guide like Mandil and I hope someday I can be a pro downhill rider," he finally confessed. "I know it's next to impossible, but I am going to try."

In that kitchen, RJ’s dreams did seem impossible. But on the trail, the obstacles melt away. RJ rides like his bike is part of him, diving through corners, launching off anything, and riding with ease, flow and joy that is beautiful to watch.

After the Tribe Gathering, Yeti president Chris Conroy and Fox OEM Sales Manager Jared Connell added RJ to their ambassador athlete roster giving RJ the tools to play in a bigger field. “Just imagine a kid from the outskirts of Kathmandu riding a bicycle that he welded together himself and now riding the latest and greatest Yeti bicycle, gearing up to take on the world,” says Mandil.

In the three years since I rode with RJ, he learned to speak English, and has won Nepali Nationals again and again. “He’s super outgoing now, always joking around is very well liked,” says Mandil. “Coming out of the scene to break into the world stage is extremely difficult, but I believe RJ can do it.”

He’s getting support from abroad. RJ was nominated National Geographic Adventurer of the Year, and filmmaker Joey Schusler made a movie about him, "RJ Ripper." Riders all over the world have contributed to a GoFundMe campaign to support RJ’s race travel. His biggest obstacle, ironically, is administrative. RJ’s visa application was rejected in 2018 because he doesn’t own a house in Kathmandu.

But RJ, as always, is staying positive.

And with Mandil, RJ mapped out a three-year plan that culminates in racing a full EWS calendar. “Then we can see where he stands amongst the world’s fastest racers,” says Mandil. “Having a kid from Nepal in the EWS will really put the ‘world’ into Enduro World Series."

As for RJ’s parents, they’re beyond proud.

“He is doing something that we could not even have imagined,” says Deepa. “We never thought he would reach this far.”